Where YOU define "ADVENTURE!"

Respite is a 42 foot Manta Mark II sailing catamaran. When not under charter, she is fully outfitted for offshore cruising (more about that later). Respite has sailed all of the East Coast of the United States, the Bahamas and the Caribbean. Captain Rod is a meticulous owner, and keeps Respite clean and safe.

Respite has ample room for guests and passengers. The spacious main saloon* seats seven comfortably at the table. The saloon windows provide a panoramic view of the surroundings, and, unlike many sailing yachts, there is ample headroom in Respite’s saloon. The saloon features a large, LED TV, a sweet stereo, an Xbox and a computer. The galley is well appointed with a double sink, a gas, three-burner stove and oven, microwave, toaster oven and, most importantly, a coffee maker (Captain Rod is a coffee snob). Oh, there is also a huge refrigerator and freezer to keep your beverages icy cold.

Respite has three berths. The owner’s suite occupies the port hull. The owner’s berth is aft, with a queen-sized bed and plenty of storage. The owner’s head is forward, with full shower, wash basin and fresh-water electric head.

Respite has a 5.5 Kw generator, and two central air conditioners—one forward and one aft—to keep you cool on hot and humid nights.

Respite is Open and Breezy

Respite’s cockpit comfortably seats more than 10 people (but charters are limited to six guests). One of the showcase features of the Manta sailing cats is the swing seat, positioned aft of and above the main seating area. From this seat, guests get a 360 degree view of the horizon.

When at anchor or underway in-shore, guests can hang out on the forward tramps for some sunbathing or dolphin, turtle or bird watching.

Safety is almost all about preparedness and planning.

Respite is equipped with the latest in safety gear. She has a Garmin radar, chartplotter, Automatic Identification System ("AIS") (her identity and location is broadcast to other vessels as a way to avoid collision) and depth sounder all linked in a NMEA 2000 network. She has a B&G/Simrad autopilot and chartplotter, linked on a separate NMEA 2000 network. In fact, she has damn near redundant everything. In addition to the primary Garmin and B&G chartplotters, she has a backup Garmin chartplotter above the helm. She has two VHF radios, each connected to a separate power source, and each with its own VHF antenna. She has six-person life raft, an EPIRB and SPOT personal locator beacon for the crew member at the helm. In addition, she carries a satellite phone and an SSB radio.

Captain Rod is a conservative sailor. When sailing offshore, he does his best to ensure a safe weather window. Respite is equipped with a weather receiver, a weather station and a computer used to check several forecasts several times a day. In addition, using the SSB, Respite can monitor a host of shortwave weather broadcasts. Captain Rod does not like surprises—especially from the weather—so he watches the forecasts like a hawk. So far, he has been able to avoid sailing in dangerous conditions. (This is not to say he has not been sometimes surprised when NOAA predicts 2 to 4 foot seas and he finds 6 to 8 foot ones instead, or when NOAA predicts winds of 10 knots or less, and he ends up double reefed in 20-25 knot winds. It happens.)

Respite was repowered in 2012 with twin Yanmar 3YM30s and new saildrives. These engines are reliable and well-maintained. Respite’s standing rigging was replaced in 2013, and her running rigging is continuously inspected and replaced on a rotating schedule.

Respite has electric and manual bilge pumps in each bilge, and she carries a backup manual “gusher” bilge pump.

For offshore sailing, Respite carries a sequential drogue and a sea anchor.

*Boaters can’t seem to agree on anything. Boaters will come to blows (especially after a long night in a tavern) over arguments about everything from ground tackle (anchors and their associated chain, rode, etc.) to battery selection and charging methods. Thanks to TaoJones on Cruisers Forum for the following blub about “saloons:” "Many boaters seem to find the word cabin rather lacking the elegance and significance they associate with their boats. Therefore, they refer to their cabin as a salon, a fancy French term for reception hall or a room filled with perfumed finery. Hairdressers, beauticians, and couturiers have salons; sailors have a saloon. The Encyclopedia of Nautical Knowledge defines a saloon this way: “In a cargo and smaller passenger vessels, the main cabin, or that serving as a dining-room, assembly room, etc.” The Oxford Concise Dictionary describes a saloon as a “public room for first-class or for all passengers on ship.”The only dissonant note is sounded by Webster’s New World Dictionary, which allows the use of both salon and saloon but then confesses that saloon is “specifically, the main social cabin of a passenger ship.” Nevertheless, whereas most sailors use the word saloon, most power boaters seem to prefer salon. It’s possible that some boaters use the word salon because they don’t want their boats to be associated with saloons where strong alcoholic drinks are served and ruffians indulge in fisticuffs. But a better choice than either salon or saloon would be cabin. What could be simpler or more correct?" TaoJones 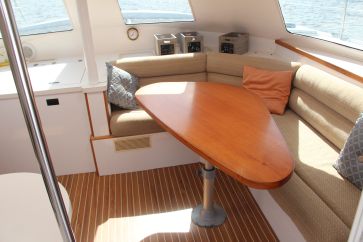 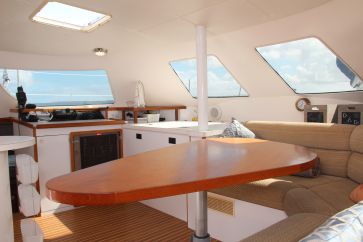 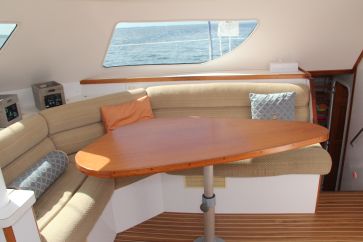 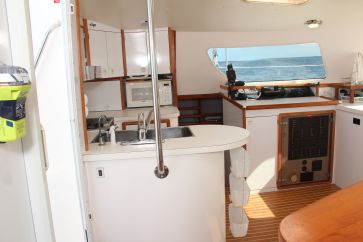 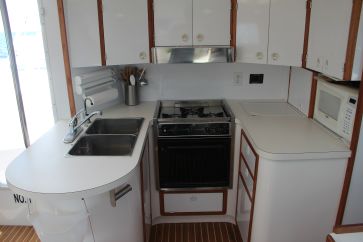 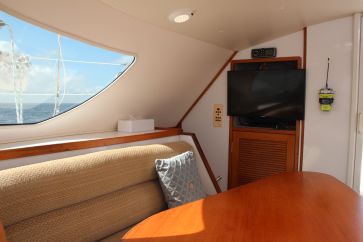